AWS offers a number of messaging and queuing services, each one with its own pros and cons. This post describes each service and when to use it. 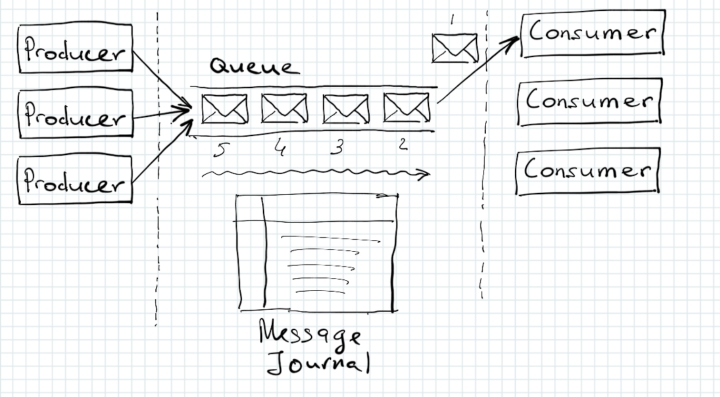 AWS SQS stands for Simple Queue Service. It is as simple as it gets — you can send a message to a queue, you can receive it from a queue, and you can acknowledge the message by deleting it from the queue. Only one consumer can process the same message at a time. It is a native AWS service that requires the use of AWS REST API or an AWS SDK for your programming language.

It is a genuinely server-less managed service. The developers don’t need to worry about scalability, storage, or performance. SQS queues scale as required. You only pay for what you use which turns out to be pennies per million messages.

SQS integrates well with other AWS services such as AWS Lambda. For example, SQS will trigger a lambda function for each message in the queue. While SQS is very simple in that it only supports “send,” “receive,” and “delete” operations, I recommend abstracting these routines at a bit of a higher level.

SQS is durable and supports Dead Letter Queues and configurable re-delivery policy. If for some reason your consumer took a message off the queue but failed to correctly process it, SQS will re-attempt delivery a few times (configurable) before eventually delivering the failed message to the Dead Letter Queue.

You can find SQS documentation here.

When to use SQS?

When not to use SQS? 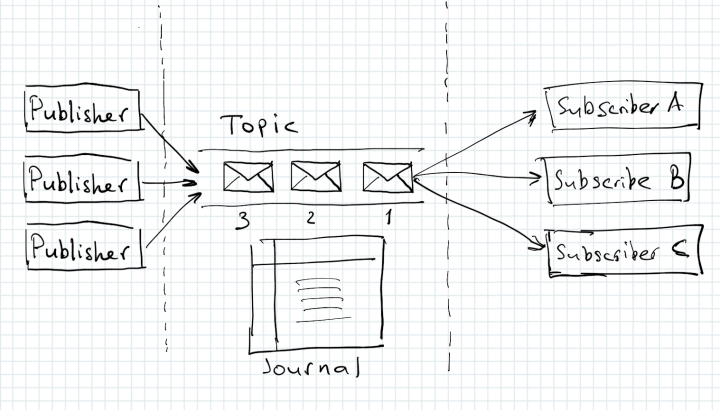 SNS offers some degree of durability. Messages are saved before producers get a confirmation. There is a configurable re-delivery policy depending on the destination. Applications requiring assurances that messages will eventually get delivered to their destinations should use SNS to route to SQS and then consume from SQS.

When to use SNS?

When not to use SNS? 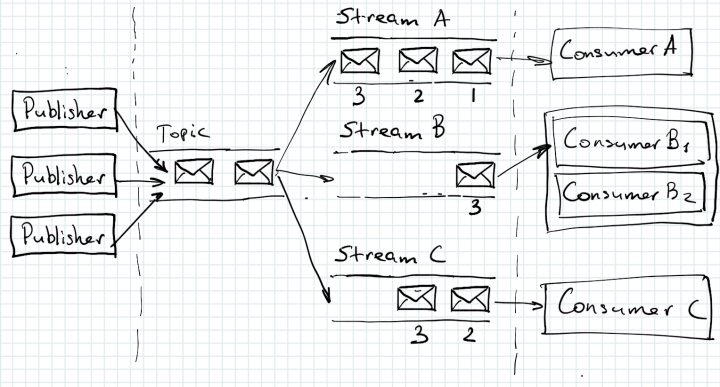 AWS Kinesis is a managed data streaming service. Although it does support video and multi-media streams, it is beyond the scope of this article.

Producers put data on a stream using Kinesis client library. Multiple different Kinesis data stream consumers can then process data from the stream concurrently. This is an important distinction from queues where only one kind of a consumer can take messages off the same queue.

For example, one consumer can archive product order data while another analyzes data for fraud in real-time, and yet another one uses the data to dynamically update pricing and inventory data.

It is possible to also arrange streams into direct acyclic graphs (DAG) such that messages are forwarded to other streams to create complex stream processing. This is another distinction from queues.

Kinesis integrates well with other AWS services, including AWS Lambda. Kinesis can trigger Lambda functions in response to messages. Additionally, AWS services such as S3 or Dynamo can publish data to Kinesis streams.

When to use Kinesis?

When not to use Kinesis?

Kafka is famous but can be “Kafkaesque” to maintain in production. MSK takes a lot of the operational difficulties out of running a Kafka cluster. MSK takes care of various maintenance tasks such as backups and routine upgrades.

MSK works similarly to AWS RDS (managed database service). MSK provisions and manages the underlying compute infrastructure on your behalf. You pay for this compute capacity regardless of the workload on your Kafka cluster. In other words, MSK is a managed service, but it is not server-less.

When to use AWS MSK?

When not to use AWS MSK?

There is little reason to introduce Kafka to an application that is not already using it and does not have requirements to use Kafka specifically (for example due to latency and performance considerations). Consider using Kinesis instead.

AWS MQ is a managed ActiveMQ service. Similar to MSK for Kafka, it takes operational complexity out of running an ActiveMQ cluster. It supports JMS, NMS, AMQP, STOMP, MQTT and other industry standard messaging protocols. Most legacy applications do not require significant changes to work in AWS.

AWS MQ supports various broker topologies, including mesh networks. By being ActiveMQ-based, it supports the full range of services including queues, topics, and multiple configurations of durability, re-delivery, and replication.

Also see: Top ten differences between ActiveMQ and AWS SQS (note: I wrote that post in 2015, long before Amazon had a managed ActiveMQ service)

When to use AWS MQ (Apache ActiveMQ)?

When not to use AWS MQ?

Liked this post? In September 2020 I will ride my bicycle for 275 miles from Boston to NYC to help end AIDS. Please consider contributing to my fundraising goals.